Neutralizing the micromanager — the one you work for, or the one inside you

No matter how outstanding the organization, resources or team, a manager’s style can make or break its success. As discussed in “Micromanagement (Part One)” (http://www.managingmanagement.us/2013/11/micromanagement-part-one.html), a micromanager can inadvertently breed lack of engagement, low morale and poor productivity for both staff and the organization.

If employees feel that they are not trusted to do the job they were hired for or that their experience and knowledge are constantly being dismissed and or trumped by their manager’s actions, eventually those employees will stop taking initiative or making decisions. The most organized, deadline-driven employee will suddenly seem to procrastinate — after all, what’s the point of completing a projector task in a timely manner when history indicates the micromanaging boss will take it over or assert a different direction before the employee is done anyway? Or worse, the boss will discard a completed work and redo the whole thing him- or herself.

If the descriptions above seem all too familiar, you may be one of the frustrated and disengaged, wondering why you keep coming back each day. Oh, wait…right — you love this job. You don’t want to leave; you just wish you could get your boss to change his or her destructive ways.

Email ThisBlogThis!Share to TwitterShare to FacebookShare to Pinterest
Labels: Communicate, Do Your Job, It's You, Manage Up, Manager, Micromanage, Micromanagement, Speak Up, Supervisor, Work

What it is, what it isn’t and what to do about it 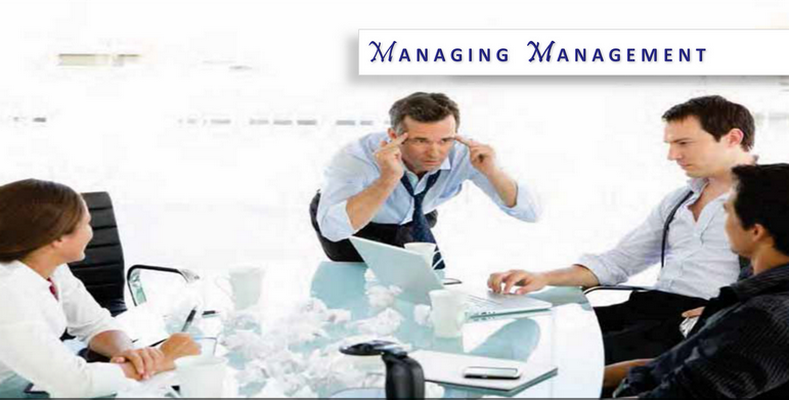 Micromanagement is the latest dirty word of the workplace and the subject of many management articles. Not a new phenomenon, it was referenced by Theodore Roosevelt when he said, “The best executive is the one who has sense enough to pick good men to do what he wants done, and self-restraint to keep from meddling with them while they do it.”

The elevated attention and sensitivity to micromanagement, however, has infused the term with weapon-like power when wielded by an underperforming employee, hurled at the supervisor who dares to hold them accountable to quality or timely work.

Making a smooth transition from peer to boss


As amateur historians, my family has been visiting civil war battlefields for decades. Nothing says family fun like thousands of reenactors in three layers of wool replica uniforms shooting replica civil war muskets at each other between cannon fire, right? My youngest was four when he saw his first reenactment at Olustee Battlefield State Park (yes, there were actually civil war battles as far south as Florida) and a passion for history was ensured for at least one more generation.


The battle of Gettysburg is definitely our favorite point of study in civil war history, rich with lessons in leadership from both Union and Confederate Commanders. One of the most commonly named heroes of Gettysburg  is Col. Joshua L. Chamberlain who, against overwhelming odds, led the 20th Maine to victory on Little Round Top on day two – the turning point of the battle and ultimately the war. Many modern-day business gurus have written about and drawn parallels from Chamberlain’s military success to contemporary leadership practices and, I’ll confess, Chamberlain has always been a personal favorite.


But just to prove that old dogs can learn new tricks, I may just have a new favorite point of study and model for modern-day leadership: General George Meade.  Of course, as the commander of the Army of the Potomac at Gettysburg, Meade was responsible for leading Union the victory at Gettysburg, and his name and military successes were no secret. Yet, here was a man who was Lincoln’s secondchoice for the job, a man who would be handed the leadership of the Army of the Potomac just three days before an unplanned encounter that became a the three-day battle which would be commonly characterized as the turning point of the civil war, yet Lincoln considered Meade a failure after Gettysburg.  What I found interesting was that several of Meade’s command decisions, which were criticized by some as “weak”, were not only the very things that enabled him to succeed where others had failed in beating Lee, but are also the antecedents of today’s principles of Management by Style( MBS ), Collaborative Leadership and Situational Leadership.


Last year Dr. Kevin Weddle, Director of War and Military Strategy at the US Army War College, presented a lecture The Gettysburg Strategic Leadership Brief to the USAWC class of 2012. I listened to Weddle describe the path that shaped this man who would lead the Union to Victory at Gettysburg. Referring to how he was with his men, Weddle described Meade as “much like Patton… he knows which ones needed a kick in the pants and which ones needed an arm around the shoulder.” This is a great characterization of Management by Style. Good managers know that, what motivates one employee is not necessarily going to be the same for another employee. Everyone (including the manager) has a unique personality type. The different hard-wiring and life experiences we each bring to a situation influences how we respond to the people, actions and demands in our environment. Knowing those nuances about each of your employees gives you a great advantage in bringing out the top performance of the individuals on your team. A great way to learn how to recognize those differences and the distinctive needs of different type of personalities is through the Myers-Briggs Type Indicator (MBTI).  To get a good overview of the MBTI and its applications to management and leadership, check out NRPA’s Supervisors Management School in November. Using the MBTI can help elevate you past the Golden Rule (treat others the way you’d like to be treated) up to the Platinum Rule: treat others the way they’d like to be treated.


General Robert E. Lee was known for being a strong and aggressive leader. Far from collaborative, Lee had always had a strong “number two” who was his main collaborator and sole sounding board on military strategy. Up until Gettysburg, that number two was Stonewall Jackson. But Lee and Stonewall were so single-minded that Lee never really had to clarify what he meant or what he wanted when he issued orders. Jackson was already on the same page with him. Unfortunately for Lee, Jackson was mortally wounded at Chancellorsville and Gettysburg would be Lee’s first engagement without his trusted partner and confidant. This is where Meade’s Collaborative Leadership style gave him a distinct advantage over Lee. Although Meade was criticized at the time for gathering his “senior team” (his Corp commanders) at the end of Day 1 to determine the standing of each commander’s troops, take stock of the movements, losses and intelligence each had to report, this collaborative approach to determine what the next day’s battle strategy should be was exactly what this moment in time required to secure the victory. While Meade would demonstrate this collaborative leadership style throughout his career, I don’t know that he would have had much of a choice, having only been on the job three days and showing up to the party a little late. If Lee had taken this collaborative approach, recognizing that Jackson’s death and absence left him far more exposed than he might have expected, he may have obtained better intelligence and made better decisions (and there may never have been a Pickett’s Charge to haunt him through history). A collaborative Leadership style, while it may have been viewed as weak and insecure compared to Lee’s commanding independent leadership style, it built the confidence of Meade’s new team and helped gain buy-in going into the next day’s battle and ultimate victory over Lee.


The natural leadership extension of Management by Style is Situational Leadership. A departure from the process-driven, one-size fits-all style of leadership that penetrated corporate culture through the growth of an industrial economy in the last century, Situational Leadership is now gaining popularity. Why? Because it’s effective. Much for the same reasons that MBS is effective in helping individuals achieve maximum results, having the ability to read a situation and recognize that, while it may look the same on the surface, a number of circumstantial factors make it dissimilar enough that applying a previously successful tactic or solution to this seemingly similar situation may not result in the same success. Meade’s Situational Leadership skills play out after the day-three victory at Gettysburg. Against President Lincoln’s strong urging to “follow up and attack General Lee as soon as possible before he can cross the river,” Meade pursued Lee’s army enough to “drive the invaders from our soil” but knew the situation was not as Lincoln perceived it, just because the numbers reported to him might indicate a decisive victory was possible. After all the battle’s losses, Meade may have had still had 20,000 more men than Lee, but Meade had lost 11 of the Corp commanders he had when the battle began. Seven days into his command, three-quarters of his new senior team was brand new again. He knew he would need to learn the personalities and styles of these new commanders as individuals before he could lead them as a team in a successful attack (and would need them to do that with confidence soon enough). Meade also knew better than to press a poor position on the move. This was not the high ground he had at Gettysburg.  This situation required a different approach than the last time he had these same odds and Meade knew different action was required. Of course, that decision practically penned his pick-slip, but his career survived, if not thrived, under the leadership of General Ulysses S. Grant.


Despite Meade’s victory at Gettysburg and several other successful engagements, Lincoln’s bitter disappointment with Meade’s caution in pursuing Lee’s troops to “crush” them as they retreated from Gettysburg eventually led Lincoln’s decision to create a position between himself and Meade that elevated Grant to the rank of lieutenant general and named him general-in-chief of the Armies of the United States. Essentially he went from being Meade’s peer to being his immediate boss. Though Meade didn’t actually lose rank or title, he recognized the potential volatility of the situation offered to resign. Grant saw this as such an honorable and humble move, he asked Meade to stay on. Over time, the two would prove to be a strong pairing. Grant was as determined and relentless as Lee was to take the fight to the opponent and win, no matter the cost. Balanced with Meade’s cautious, strategic analysis their styles complemented each other well and resulted in success. That’s not to say they got along, but Meade had a healthy respect for the situation and the man who was now his boss and, while he may confront and disagree with Grant in private, Meade was known for showing the appropriate respect and support for Grant’s decisions, presenting unification in front of the troops.


I think Denis McLaughlin said it best in his article Is There a Best Theory of Leadership?


“Over the last hundred years or so, there have been many advances in our understanding of the theory of leadership. In many ways I believe when we moved into the industrial age around the 1900’s there was much that seemed to be forgotten from the thousands of years of leadership lessons in the family, on the farm, and in past civilizations that had to be re-learned. “


While there are certainly some great emerging leadership experts today, identifying new trends in leadership and management techniques, perhaps we need not look much further than our American history books to find the tried and true practices reemerging as “new” and “innovative” styles of leading our corporate troops to business victory.